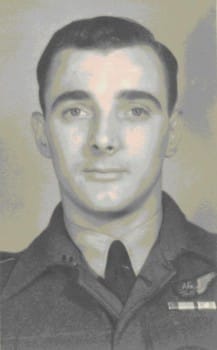 RAF Sergeant Leslie John Faircloth parachuted to safety when he was shot down on a bombing raid on the Paris/Vaires railway yard on the outskirts of Paris in 1944. The raid was in support of the allied advance following the D-Day landings just three weeks earlier on 6 June. Hidden by a local, and provided with false papers, he was eventually put on a train at the Gare de Lyon, destination Perpignan. The journey took five days.

After the Lancaster dropped its bombs, only one engine remained and they were losing height rapidly, so the pilot gave the order to abandon aircraft. All seven crew baled out and parachuted to the ground safely to the south west of Paris. Four evaded capture and three became prisoners of war.

Unable to find willing locals to help him to cross the Pyrenees, Leslie walked from Thuir to Le Boulou, where he was betrayed and handed to the Germans. He escaped – and continued his trip via Céret, and on to La Jonquera where he was picked up by a Spanish militia patrol, who took him to Figueras, interrogated him, and handed him over to the British Vice-Consul from Gerona.

The British Vice Consul gave Leslie around £12 for essentials while waiting to get home. Some months later Leslie received a letter from HM Government asking for the ‘loan’ to be re-paid. Not quite the returning hero’s welcome he had expected! Nevertheless, he and his wife celebrated their 70th wedding anniversary in May 2017.

“I landed in a field somewhere S.W. of PARIS and after walking about 100 yards hid my parachute, harness and Mae West. I walked for about an hour in a south westerly direction, and then lay low till daylight. I continued walking West, but about mid-day changed my mind and turned due East.

At about 1800 hrs (28 Jun) I saw a man working on a small allotment. I approached him and made my identity known. I had previously removed my battle dress and was in shirtsleeves. I found I was at GIF .

The man hid me in a hut, left me, and returned an hour later with food and wine, some old overalls, and a coat. I stayed in this hut that night and the whole of the next day and night. During this time the man brought me food and some straw to sleep on from his sister-in-law’s house, which was in the neighbourhood.

On 30 Jun the man and his wife took me to PARIS by train. They took me to their own house. On 30 Jun my host took one of my escape photos, and on 1 Jul a police inspector turned up with an identity card for me (my own photograph had been used) and a “carte de travail”. He returned on 2 Jul with a young man, who brought me a bread card.

We left MOULINS at about 1300 hrs and travelled via VICHY to CLERMONT FERRAND and on to LANGEAC, which we reached at 1700 hrs 6 Jul. Here there was a hold-up till 8 Jul. We then continued via ALES and NIMES .

On the way I was spoken to by a girl who, after some questioning, spotted me as being an Englishman. She was travelling with a member of the Maquis. The girl changed trains, but the man accompanied me on the train via MONTPELLIER to BEZIERS and NARBONNE. We did not reach NARBONNE till 10 Jul. The people in PARIS had only given me food for one day. My new helper took me to his house at NARBONNE, and I was given a meal. He then took me back to the train, and I continued to PERPIGNAN on my own.

I decided to try and cross the PYRENEES on my own, and on 11 Jul walked inland towards THUIR. Then turning South, after having slept on the night of 11 Jul in the woods, to a point between LE BOULOU and CERET. Here I was approached by a man who asked me if I was English. Being hungry and thinking he wanted to help me I said “Yes”, and he took me to a house. He disappeared and within ten minutes I saw him returning, followed by two Germans with rifles. I immediately left by the back door for the woods. I saw the Germans enter the house and come out and search the woods behind.

I turned S.E. and after sleeping somewhere near CERET crossed the frontier on 13 Jul and continued West of LA JUNQUERA to PONT DE MOLINS, where I was picked up by a party of Spanish militia on Patrol. I told them I was a member of the R.A.F. and they took me to their headquarters, where I stayed the night of 13 Jul. They escorted me next day to FIGUERAS, where I was taken to the fort and after a brief interrogation to the prison (14 Jul).

I remained here until the evening of 19 Jul, when I was rescued by the British Vice-Consul from GERONA.
I stayed under parole in GERONA in a hotel, and on about 20 Jul taken to BARCELONA and from here via ALHAMA (staying till 28 Jul) to MADRID (staying till 7 Aug), and then to GIBRALTAR, leaving GIBRALTAR on 9 Aug and arriving WHITCHURCH 10 Aug. 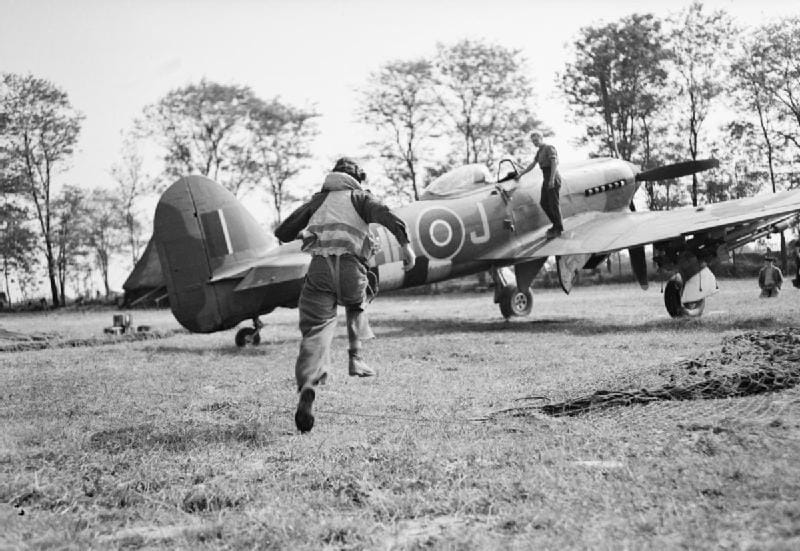 The following is an extract of crash report AIR 14/1442, ‘K’ report 203, compiled by the Operational Research Section on 29 July by the flight engineer Sgt H.D. Davies who was the first of the crew to get home. Although this is the official crash report Leslie does not agree with some of the details so this may not be the complete story.
1. The aircraft took off from WICKENBY to attack VAIRES Marshalling Yards. It was a clear night and there was a half moon.
2. The attack was scheduled to take place between 0300 and 0306 hours, and about half an hour before reaching the target, while flying at about 12,000 ft. the Lancaster’s starboard outer engine began to give trouble. The oil pressure went down slowly and when it was down to about 20 lbs./sq.in., the propeller was feathered. Just before feathering the coolant temperature was about 130 degrees C and the oil temperature was high. The propeller feathered normally and the Lancaster carried on to the target, possibly losing height slowly.
3. While over the target whitish yellow flames came from the exhausts of the port outer engine. The oil pressure was normal but the propeller was feathered as the coolant temperature began to rise. At about this time the bombs were released and almost immediately the starboard outer engine became unserviceable showing symptoms of an external coolant leak. The propeller was feathered at once.
4. The Lancaster was now flying on the port inner engine only and height was lost to 7,000 ft. in about 2 minutes. As the aircraft continued to lose height rapidly the Captain gave the order to abandon aircraft.
5. The Air Bomber, Navigator and Wireless Operator went from the front hatch and it is believed that the Rear and Mid Upper gunners left safely from the entrance door.
6. After the Wireless Operator had left the Flight Engineer un-feathered the starboard outer engine so that there was a better chance of the aircraft remaining steady while the Pilot left. He then left at once from the front hatch making a successful exit. He noticed before leaving that one of the petrol tanks (he does not remember which) had lost about 50 gallons of petrol.
7. While descending on his parachute he noticed that the Pilot had left the aircraft and was coming down safely on his parachute. He landed safely in open country at about 0340 hours.
8. After all the crew had left the aircraft, it caught fire, the starboard wing dropped and it swung off to starboard. It hit the ground and then exploded and continued to burn on the ground for some time.
9. The informant was not conscious of the aircraft having been damaged by enemy action, but he thinks it must have been hit at some time prior to the failure of the port outer and starboard inner engines — especially as he noticed that some fuel had been lost from one of the tanks. He does not think that the Pilot deliberately altered course after bombing, but it seems likely that the aircraft swung to starboard as the informant is believed to have landed in the south western outskirts of Paris.

WW2 People’s War is an online archive of wartime memories contributed by members of the public and gathered by the BBC. The archive can be found at bbc.co.uk/ww2peopleswar