This is a very good circular walk from Arles sur Tech which starts on the GR 10 at Arles and then comes back north/north east to the Batterie de Santa Engracia. The descent is then in a westerly direction into Arles sur Tech.

Length of walk is approx 10km. Approx 700m of ascent and takes around 5 hours including stops to take in scenery/ visit la Batterie.

This walk is steep in places and the use of stout walking boots and a walking pole (or 2) are definitely recommended. You need to be used to mountain walking/ fit. The views over Arles and Amelie are very good and extend to 360 degrees from la Batterie.
Access: map IGN 1:25000 Ceret, Amelie les Bains, Palada 2449OT 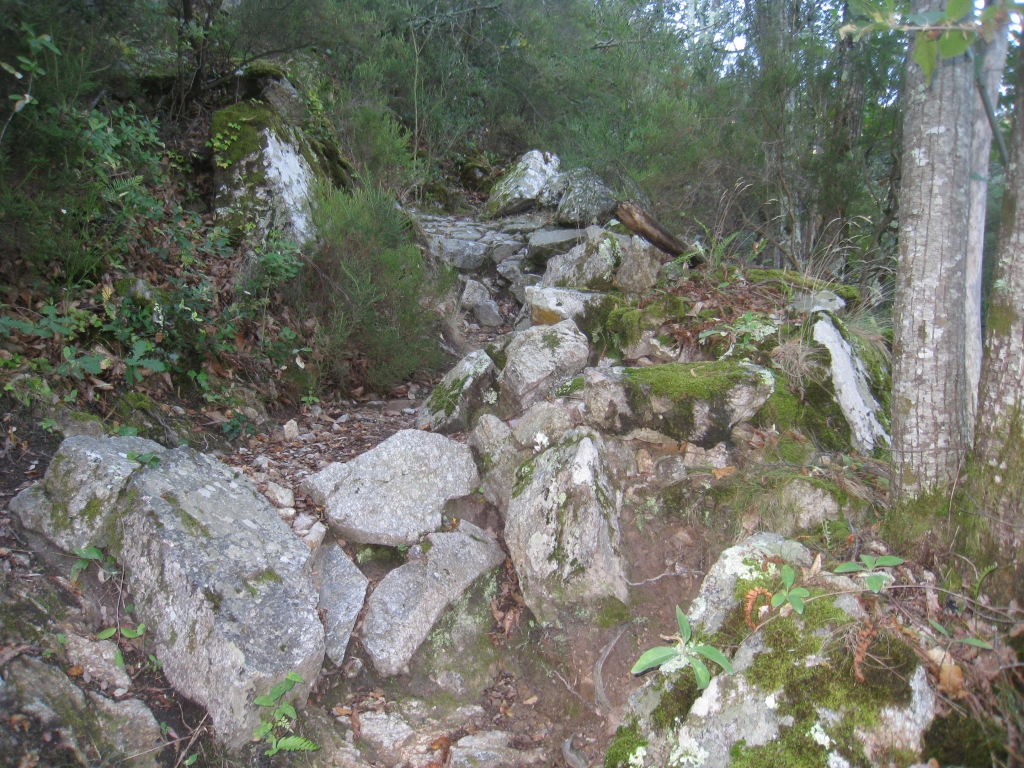 Start of Walk: Follow the D115 from Le Boulou via Amelie les Bains to Arles sur Tech. On arriving at Arles take the road off to the left signed “Centre Ville” and park at the Salle de Fetes which is on your left after a few hundred metres. The GR 10 starts from the left hand side of this building, with your back to the road. Starting height 287m

The Walk
Follow the GR 10 path (marking is red and white) past the old factory site, over a footbridge spanning the Tech and then crossing a dry river bed (note: think this would be impassable after heavy rains!) to enter a meadow. The GR 10 goes up the meadow for a few hundred metres then re enters the river bed to cross into the woods. After walking for about 10-15 minutes from the start you cross a lane and the path continues into woodland.

From now on it is onwards and upwards! The path is rocky and rises quickly in a south easterly direction, zig-zagging up the mountain. However, even on a hot day it is a good route as you are in woodland all the way.

En route there are several posts which tell you what height you are at. The ascent is steady with some contouring, especially as you near the Coll. Before reaching the Coll you will see a yellow sign indicating the main route to the Batterie and Chapelle de Santa Engracia on your left.

Continue to the Coll de Paracolls at 902m. The ascent is likely to take about two to two and a half hours 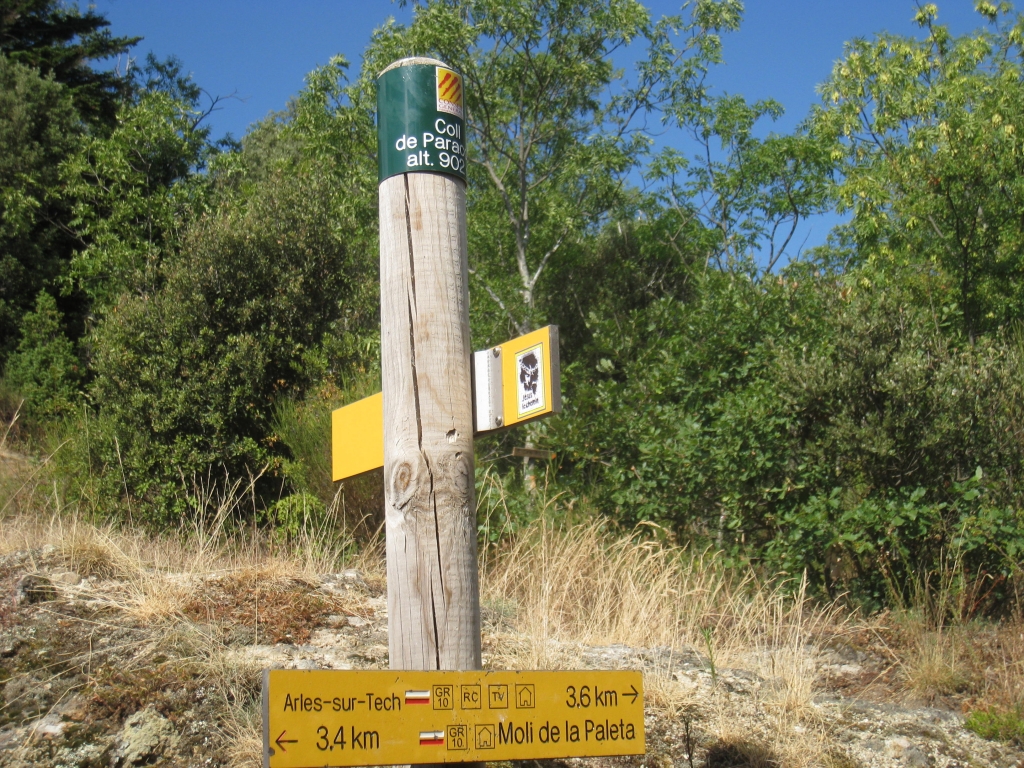 Option 2 is to take the path from the crossroads at the Coll over the rocky ridge to 982m and down to join the main path to Santa Engracia. This path is signed with a wooden sign La Grande Batterie with a line across it. The line made us dubious about following it but in fact we saw the start of the path and then, later, the other end where it joined the main path to Santa Engracia (and where it was signed “Coll de Paracolls) – in fact it looked as though it would have been fine – but we will try that on another occasion!
Note – from the Coll The GR 10 descends into the valley at Moli de la Paleta on the D53b past Montalba. There is also a route up to Pilo de Belmaig 1280m on your right but that makes a very long walk with a long and complex set of paths for the descent into Arles to make a circular route) 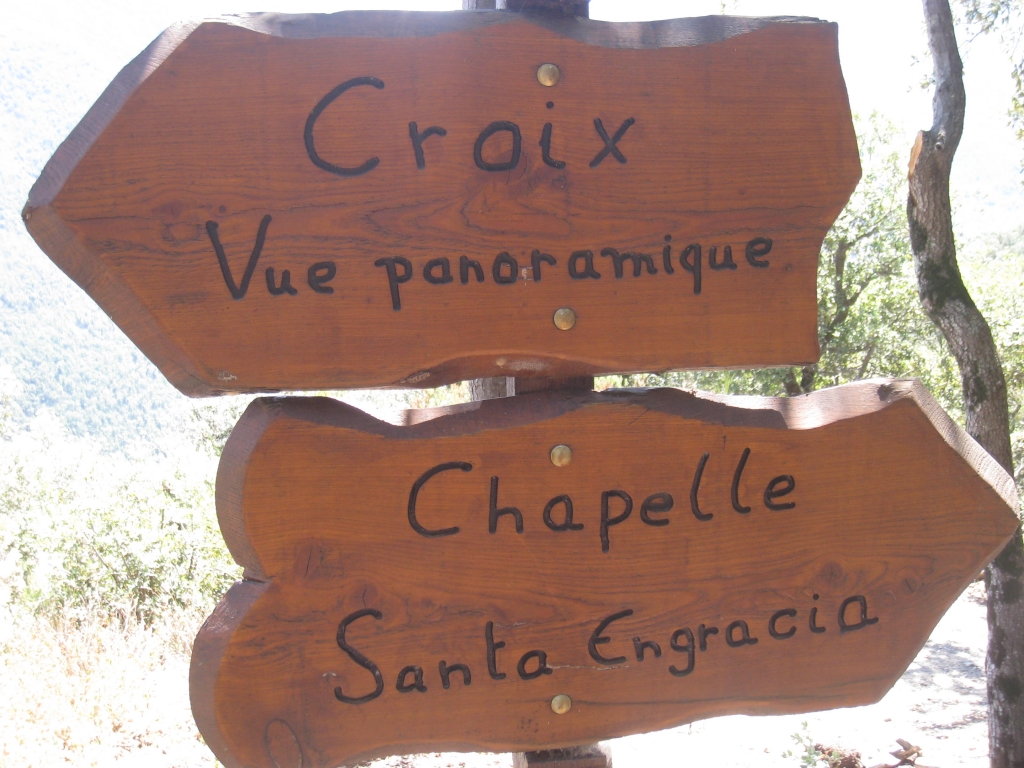 So we took Option 1
Drop back down the route to the yellow sign for Santa Engracia at 829m. The path contours round through woodland and passes the incoming ridge path before reaching a sign to the Grande Batterie.

The walk up to the Batterie de Santa Engracia is very worthwhile – we highly recommend it. The construction of the Batterie is amazing and its position gives it a commanding view to the coast, down all the mountain valleys and over the Pyrenees in all directions.

Descend to the path you were on and keep descending a now rather broad stoney track until you see a yellow sign for Arles sur Tech on your left. This is the way down. (On the map there appears to be an earlier very steep path down but we did not see it and would recommend the main signed path)

However, if you wish to visit the Chapelle de Santa Engracia you can continue a hundred metres to the path on your right leading to the Chapelle. There is a nice bench on the hillside where the path goes off to the right – Place Julio. These wooden signs at the Place indicate the clearly marked route.

The path down to Arles is well marked and well trodden. At lower levels it is rather gritty and slippery in places but overall a good route.

Emerge from the descent at Mas d’en Draguines where you pick up the lane to take you back. At a junction of lanes bear left/straight on and don’t take the one to Battalia d’Avall. The lane weaves a bit and passes a restaurant/mini golf after which a path cuts the corner into the woods for 100m.

Look out for the GR10 soon after this on your right. If you reach the red and white lines with a line across them you have gone a few metres too far. 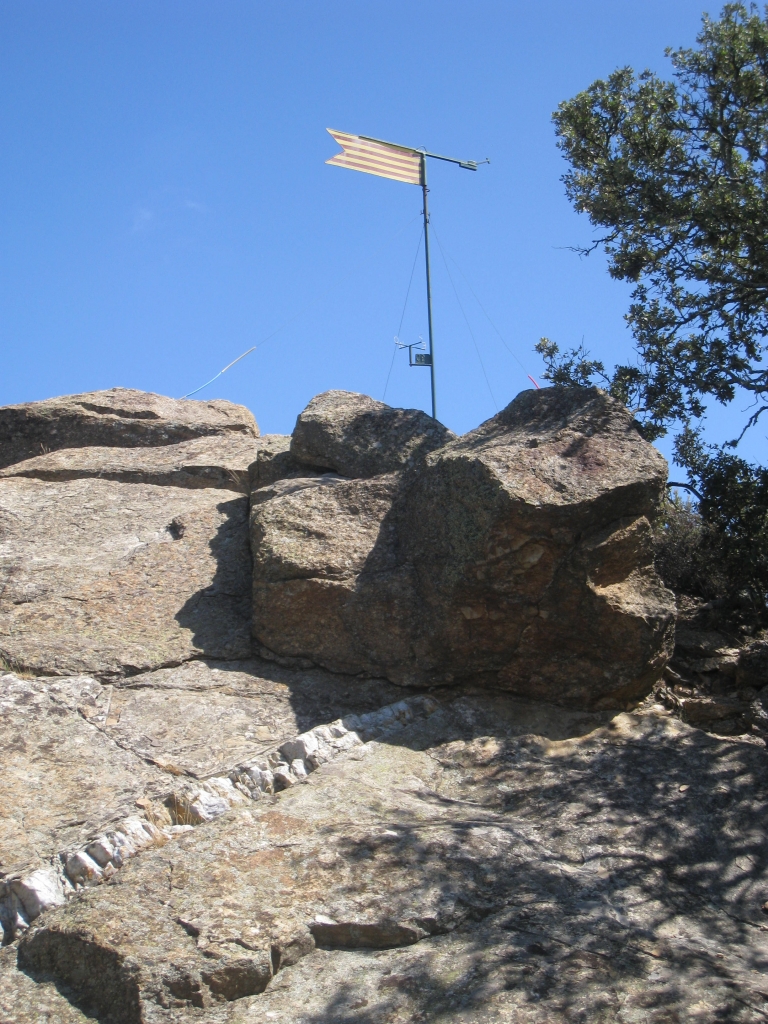 So for the last half kilometre of the walk pick up the path into the woods then meadow on your right and return to Arles across the footbridge to find your car in the parking at the Salle de Fetes.